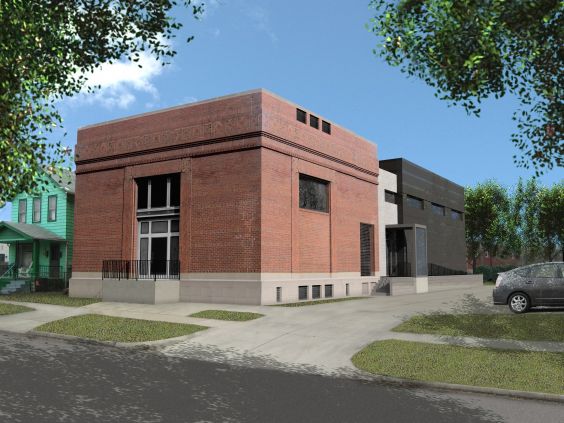 Inside of the stout brick building that once lent power to Ohio City’s trolley cars, a bold gallery is taking shape that will provide crackling new energy to the west side’s art scene.

When it opens in February, The Transformer Station will house the col-lection of nationally-known art collec-tors Fred and Laura Bidwell. It will also incorporate rotating exhibitions of con-temporary art jointly curated by the Bidwells and the Cleveland Museum of Art.

Bidwell was first drawn to Ohio City by the building’s unique architecture and the collection of cutting-edge artistic venues that are a stone’s throw away. “We wanted to break down barri-ers between the east and west side,” he says, citing the presence of SPACES, the Intermuseum Conservation Association (ICA), Cleveland Public Theatre and even the Happy Dog within the area.

“Although there are great things hap-pening in University Circle, the east side is no longer seen as the hub for culture,” he adds. “It’s totally turning around.There’s a bit of the center of gravity moving to the west side. That’s where the younger, hotter, contemporary art is.”

The Bidwells could not have picked a more striking building than the Trans-former Station, which is located at the corner of Church Avenue and West 29th. Operated as a foundry and private residence for decades, it features soaring ceilings, clerestory windows and even a massive dangling crane once used to move the transformer into place.

With a large addition on the rear of the property designed by architect John Williams, the gallery will be about 8,000 square feet in total. Initially, it will be open to the public on Thursdays, Fridays and Saturdays.

The property will be owned and operated by the Bidwell Foundation. Fred and Laura Bidwell will curate half of the gallery’s shows; CMA will arrange the other half. Like its parent museum, it will be completely free.

“We were inspired by the private museums we’ve seen in Europe and on the West Coast,” says Bidwell, who plans to donate his collection to CMA after a period of 15 years. “Cleveland is perfect for this because of all the underutilized former industrial space. We just fell in love with the building and the neighborhood.”

The partnership between the Bidwells and CMA took shape quickly after Director David Franklin
learned what the couple planned to do with their collection. “He said instantly, ‘How could CMA be part of it?’” says Bidwell. “We started talking and just got excited.”

The Transformer Station is the institution’s first foray into the west side. It will provide CMA with a bold new venue to create cutting-edge, contemporary shows.

“As great as they are, they’re big and intimidating,” says Bidwell of the famed museum. “This is a place that will allow them to be more experimental and flexible. They can do things that seem weird and not appropri-ate at that fancy museum on the east side of Cleveland.

Historically, CMA has been seen as not quite as strong in its contemporary holdings as it is in other artistic periods. Franklin has said that he aims to erase that perception. Beyond the Transformer Station, CMA is also collaborating with the Museum of Contemporary Art (MOCA) Cleveland and other institutions in town.

In effect, one might think of the Transformer Station gallery in Ohio City as not only CMA’s cultural outpost on the west side, but also as a bold new direction for the museum as it wraps up its massive renovation project.

For the Bidwells, the gallery represents an opportunity to get their work out of storage, where it’s been for years as their collection has mushroomed out of control. “It’s stored at the Intermuseum Conservation Association, so we can roll it across the street,” Bidwell says, gesturing to the ICA building that backs up to Church Ave.

The Bidwells have been collecting contemporary art for about 20 years, with a focus on photography. The series of photographs in Fred Bidwell’s temporary office in the Ohio City Firehouse, for instance, depict explosions which the artist based on video game images.

“This is an interesting, dynamic part of the art world,” explains Bidwell. “Photography is blending
into painting. Our collection is all photo-based, but we define that very broadly. This is stuff that doesn’t look like photography, but is based on photography in some way."

For Bidwell, contemporary art is not only beautiful, but also relevant to our society’s most pressing issues. “It’s about artists thinking and engaging in the issues of today,” he says, citing the Bidwell Foundation’s role in the ‘Detroit Disassembled’ exhibition at the National Building Museum in Washington D.C. as one example of how contemporary art can tackle our culture’s problems. “Artists show all of us how to think outside the box."

Although many people find contemporary art to be challenging and intimidating, Bidwell invites them to visit the museum when it opens in February. Viewing contemporary art with fresh eyes might surprise you. “Contempory art is new – you’ve never seen it before,” says Bidwell. “That’s part of the adventure and why it’s interesting. You don’t know what will or won’t be a masterpiece.”