Historic St. John's Once Again Beams with Light and Life 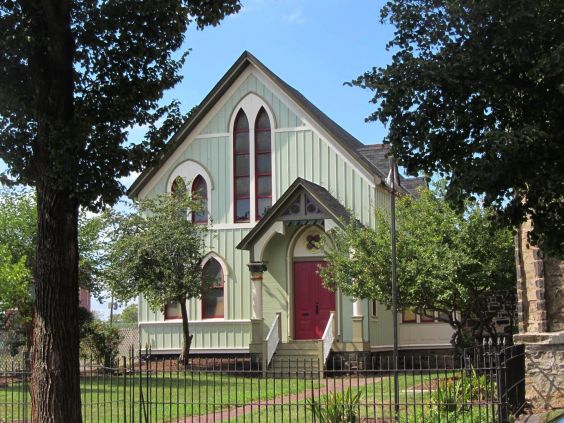 Quietly tucked away in the northeast corner of our neighborhood sits one of the most storied churches in all of Ohio. St. John’s, built in 1836, is the oldest church in Cuyahoga County, and one of the oldest in the state. For the past 177 years, St. John’s has been a spiritual home to mayors, senators, ambassadors, and captains of industry – but its real significance is for serving as a home to those without power, prestige, or prominence. St. John’s – through its abolitionist parishioners and the citizens of Ohio City – became known as Station Hope, a temporary refuge for those seeking freedom along the Underground Railroad. Yet, this national landmark has sat empty for too long.

Recently, a group of Ohio City residents and members of the Episcopal Diocese of Ohio have joined efforts and formed the Friends of St. John’s to bring the church and parish hall back to life and into the service of the community. A celebration of this new life was held during an Easter Vigil service at the church – the first in years. The packed crowed was as diverse – in every sense – as our neighborhood.

There are many ambitious projects and improvements underway. One of the first projects is to place a beacon atop the steeple, reminiscent of the light shown from the steeple over 140 years ago to signal boats quietly waiting on the river below to carry former slaves to freedom in Canada. This beacon will once again single – this time to all – St. John’s and Ohio City’s history roles in the unending quest for greater freedom and liberty.  At the annual Ohio City, Inc. meeting in April, the community voted to give a neighborhood improvement grant to help fund this beacon and efforts are underway to complete the project this summer.

Throughout the summer, events will be held at St. John’s, including theater productions, Underground Railroad education and a beacon lighting ceremony.  All are welcome to participate in the revitalization of its history, legacy and commitment to social justice.